Facility layout in a short time, even without knowledge of factory planning: this is made possible by an open-source software called MeFaP, which has been developed by scientists at the Institute for Integrated Production Hanover (IPH) gGmbH. MeFaP is now freely accessible on the web. Companies can use the software to automatically evaluate and optimise their existing facility layouts – or to generate entirely new layouts.

This software could revolutionise factory planning: MeFaP automatically calculates facility layouts and optimises them according to the users' wishes. The software thus takes over a task that factory planning experts used to spend days on.

This is particularly useful for small and medium-sized companies that do not have factory planning projects as part of their daily business – and usually do not have trained personnel for this. From now on, these companies can check with little effort whether their current factory layout is still up to date or whether a restructuring could be useful to produce more efficiently.

"The software does not take over the entire factory planning process, but it saves an enormous amount of time in the initial steps," explains IPH employee Paul Aurich, who was the leading developer of the software and intends to focus on automated layout planning as the subject of his doctorate.

The name MeFaP stands for "Method for quantitative, multidimensional factory layout planning (MeFaP)". The basis for the open-source software is the research project with the same name, which IPH conducted with funding from the German Federal Ministry for Economic Affairs and Energy.

"It was important to us to design the software in such a way that anyone can use it without help," says Aurich. "At the same time, the software leaves a lot of freedom for anyone who is already familiar with factory planning and wants to optimise a facility layout in more detail."

On the user interface, first the factory floor plan is sketched in and divided into an uniform grid. The individual cells of the grid represent areas of at least one metre in length and one metre in width. The coarser the grid, the less time the software needs to calculate the layout at the end. In addition, the software users can assign properties to each cell. For example, the ceiling height, floor load capacity, type of lighting and the available supply systems such as water, compressed air and electricity can be stored.

Then so-called factory objects or facilities can be added. By this, factory planners mean, for example, areas for storage, production, assembly and offices. The approximate space requirements are first defined for all these facilities. In addition, users can freely set many other properties: Is it a production area with large and heavy machinery that may only be placed in a factory area with high ceilings and a stable floor? Are they assembly workplaces that need a lot of light or offices that should be placed as far away as possible from noisy machines? Does the area necessarily have to be placed along an external wall, as it's the case for areas that provide the arrival and departure of goods, for example?

The software needs all this data to be able to optimally arrange the individual facilities in the factory building. "Companies have to gather this data anyway when they start a factory planning project," says Aurich. "The software supports this by asking for all the relevant information." In this way, even companies that have never planned a factory before get an idea of which kind of data is necessary in the first place. Not all details have to be stored – but the more information the software gets, the better the result will be.

Once the data is entered, the optimisation begins. "Our software can create a first layout draft in five minutes," says Aurich. For a detailed optimisation, however, the programme needs a few days. "It should then run on a separate computer that is not used for anything else," advises Aurich. Various algorithms create countless layout variants in the background and evaluate them. At the end, the software displays the five best layouts – including the corresponding evaluation. In addition, users can access other variants that did not score as well. All automatically created layouts can then be edited manually.

In any case, the software leaves a lot of freedom. Even if the default settings are chosen in such a way that anyone can click through without prior knowledge – anyone who is familiar with factory planning can give the software precise specifications. For example, users can specify that all storage areas must be arranged in a certain area. They can specify fixed areas for paths or manually assign a fixed place to certain facilities. Furthermore, it can be determined which objectives are most important for the layout evaluation.

The users even have an influence on how the software proceeds when creating the layout. By default, the facilities are arranged randomly, starting with the largest object – unless otherwise specified. "We have implemented several algorithms in the software that users can choose between," says Aurich. "Because it makes a difference whether you want to try as many variants as possible to get a good layout – or whether you already have a good layout that you want to improve further." Professionals let the software calculate several times so that it first outputs a variety of drafts and then optimises the best layout even further.

However, the software can not only generate new layouts, but also evaluate existing layouts. Companies can enter their current factory layout into the software and receive evaluations in eleven categories, including material flow and space utilisation. "This is perhaps the most important use case for small and medium-sized companies," says Aurich. "Because it allows them to independently assess whether a factory planning process might be worthwhile or whether their layout is already good as it is."

The engineers at IPH have been planning factories for companies for more than three decades, especially for small and medium-sized companies in Lower Saxony. They will also use the software for their own factory planning projects in the future to save time and resources. "We are excited to see what ideas the algorithm comes up with that we might not have even considered," says Aurich. After all, factory planning projects will not run entirely without human expert knowledge in the future – but artificial and human intelligence can complement each other very well.

The open-source software MeFaP is published under the software licence European Union Public Licence V. 1.2 and is freely available – both on the project website (mefap.iph-hannover.de) and via GitLab (gitlab.com/iph-group/lo_aif_mefap_2017/mefap). 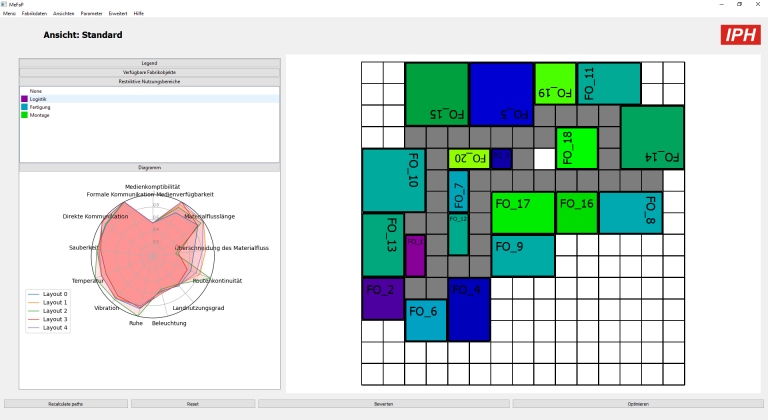 Layout planning
This facility layout was automatically created by the MeFaP software. 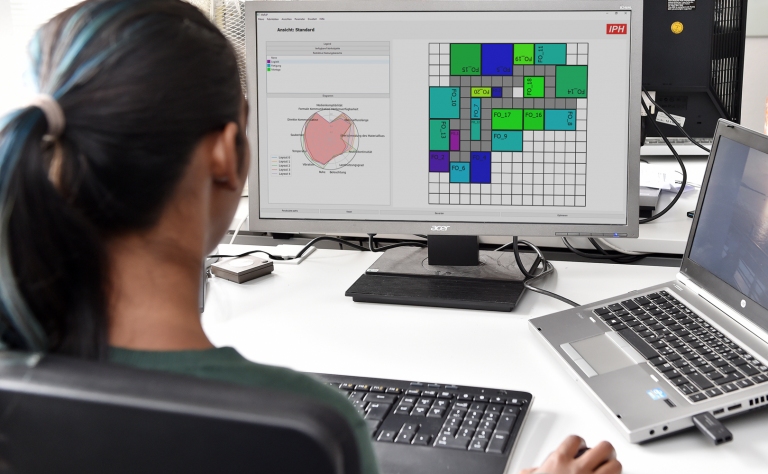 Open-source software
Companies can use the software to automatically evaluate and optimise their existing facility layouts – or to generate entirely new layouts.