Promoting young researchers is one major concern of the Institut für Integrierte Produktion Hannover (IPH) gGmbH. On the one hand, we offer lectures and practical projects to students, on the other hand, we give future engineers the opportunity to gain practical experience and money by taking up a part-time job or by writing a thesis at our institute. Financially, we support promising young academics through prize money and sponsorships.

IPH is the official LUHbots sponsor. Team LUHbots consists of students of Leibniz Universität Hannover. With their robots, they participate successfully in RoboCup@Work competitions all over the world. In the past, they have already won the World Championship more than once.

Granting the IPH Future Award for the best student thesis

Since 2016, the IPH honours the best student thesis of the year with 500 euros. All students, writing their Bachelor, Master or Diploma thesis at IPH and submitting their work to the Faculty by 30 September, are admitted to participate. For thesis topics click here – we look forward to receiving your application! 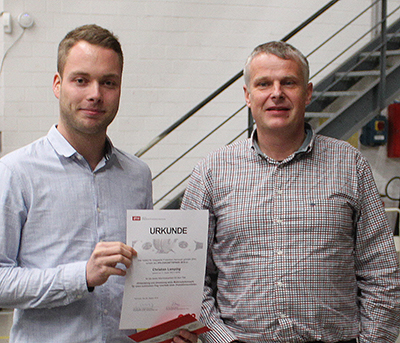 The IPH Future Award 2019 went to Christian Lamping. In his master thesis, he developed a concept for autonomous drone flying in a production environment. IPH shareholder Professor Ludger Overmeyer (right) described the concept as "very promising and innovative" and praised in particular the care with which Christian has brought together many different systems via different interfaces - including laser scanners, acceleration sensors, gyroscope, drone control and more. 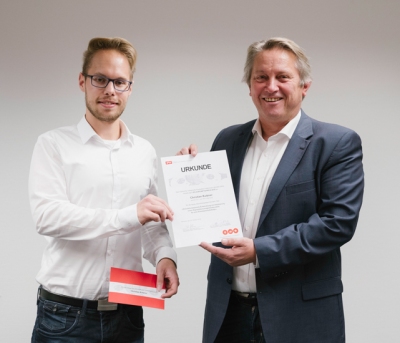 Christian Kutzner was awarded the IPH Future Award 2018. His master's thesis dealt with the development of a simulation model for the capacitive planning of means of transport (wagons) for a railway supply chain. Christian used this model to determine the number of wagons required to meet a specified deadline. IPH shareholder Professor Peter Nyhuis (right in the picture) praised his complex work and the high workload. In addition, the topic has a high strategic relevance for the railway company with which Christian cooperated for this work, Nyhuis says. 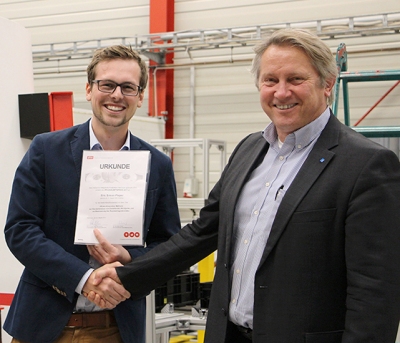 The IPH Future Award 2017 was granted to Eric Pieper. In his Master thesis, the industrial engineer did research on wind turbine repowering – dealing with the question, if and when it is profitable to replace existing plants by new ones. Eric analysed all wind parks in Germany and developed an Excel tool to determine the potential for repowering. At the award ceremony, IPH managing partner Professor Peter Nyhuis (right) honoured the thesis for its "100% practical relevance". 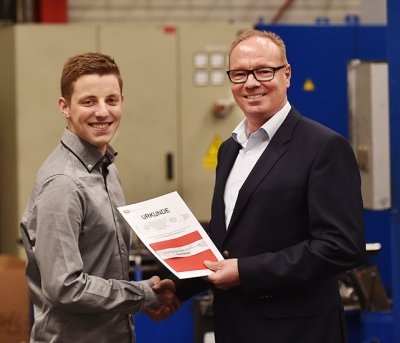 The IPH Future Award 2016 was won by Daniel Kampen. In his Bachelor thesis, he developed an evolutionary algorithm which designs preforms for forging parts automatically. IPH managing partner Professor Bernd-Arno Behrens (right) honoured the work as "excellent". The algorithm helps forging companies to save material and time: In preforms designed with the algorithm, burr formation is reduced which in turn reduces the amount of steel required during forging.

What our employees say 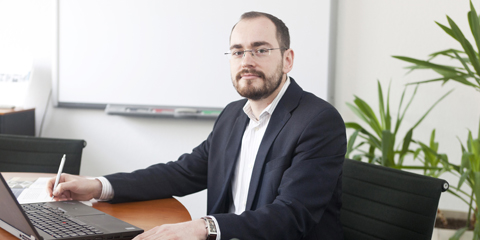 ‚‚Working at IPH never gets boring. The whole team is constantly working on novel research ideas, and a multitude of consulting projects gives us the opportunity to get into contact with many interesting companies.‘‘