The IPH presents a solution at HANNOVER MESSE 2015 to make ship traffic more reliable while decreasing the maintenance costs at the same time. In cooperation with project partners, the research institute from Hannover, Germany, has developed a sensor system which continuously monitors the condition of the marine gearbox, thus preventing breakdowns. Special feature: the monitoring system works wirelessly and energy-autonomously. The required electrical power is generated where it is needed – directly at the sensor

As well as cars need to be certified regularly (in Germany by the TÜV – Technical Inspection Association), ships need to be inspected – if the powertrain stops unexpectedly, it is not only annoying but also dangerous. In this context, the gearbox is of particular importance as it is a critical element between the diesel engine and the propeller system, which ensures the reliability of the entire marine propulsion. If the gearbox breaks down, the entire propulsion stops.

Ship inspections cost time and money like the TÜV inspections for cars. The ships need to stay in port and the shipping companies lose revenue. The extension of inspection intervals is only granted if the machinery condition is continuously monitored, which is called ‘Condition-Based Maintenance’ (CBM). Sensor elements measure torques, vibrations and temperatures in the gearbox around the clock. With the help of these data it is possible to detect failures. A maintenance service can be done before the gearbox breaks down. So far, CBM systems are expensive, because lots of cables must be routed from the board computer and power supply to the gearbox.

In the future wireless CBM is possible: the ‘Institut für Integrierte Produktion Hannover gGmbH’ (IPH) developed a sensor system in cooperation with project partners that works without cables for energy supply or data transmission – and does not even need batteries. The researchers estimate that the sensor system can work for at least ten years once installed at the gearbox. The entire electrical components are housed in a sturdy metal case the size of a coffee cup, so neither dirt nor sea water can influence the working process.

The energy which is needed to measure and transmit data to the board computer is generated right at the sensor node. This is possible with the help of energy harvesting systems, which use the temperature difference between sea water and gearbox surface. The operating temperature of the gearbox surface is at a constant level of about 60°C. The sea water temperature depends on the region where the ship is operating: It can be down to 5°C cold or up to 25°C warm, but in any case it is always much cooler than the gearbox surface. Thermoelectric generators use the temperature difference to supply the sensor nodes with electrical energy.

In the research project ‘DriveCoM’ the IPH as project coordinator has worked closely together with industry partners. The microsensys GmbH, based in Erfurt, has realized the radio transmission from the sensor nodes to the board computer: the data are passively transferred using RFID technology, which requires very small amounts of energy. The Bachmann Monitoring GmbH from Rudolstadt has dealt with the selection of sensors and the structure of the receiving station of the CBM system. The IPH was responsible for the signal analysis: characteristic values can be calculated from the measurement data on the microcontroller of the sensor node and indicate whether a potential damage is about to occur. The energy harvesting system is the specialty of the HSG-IMIT – Institut für Mikro- und Informationstechnik der Hahn-Schickard-Gesellschaft e.V. from Villingen-Schwenningen. During the research project the HSG-IMIT adapted the thermoelectric generator, so that the sensor nodes are continuously supplied with energy. Finally the sensor system was tested on the gearbox test rig of REINTJES GmbH, a manufacturer of marine gearboxes from Hameln.

At HANNOVER MESSE 2015, the world's biggest industrial fair from 13 to 17 April, the results of the project ‘DriveCoM’ are presented. At the joint stand of the state of Lower Saxony in Hall 2 (stand A08) a real marine gearbox from REINTJES GmbH will be shown – and the visitors learn how the wireless and energy-autonomous sensor system works. 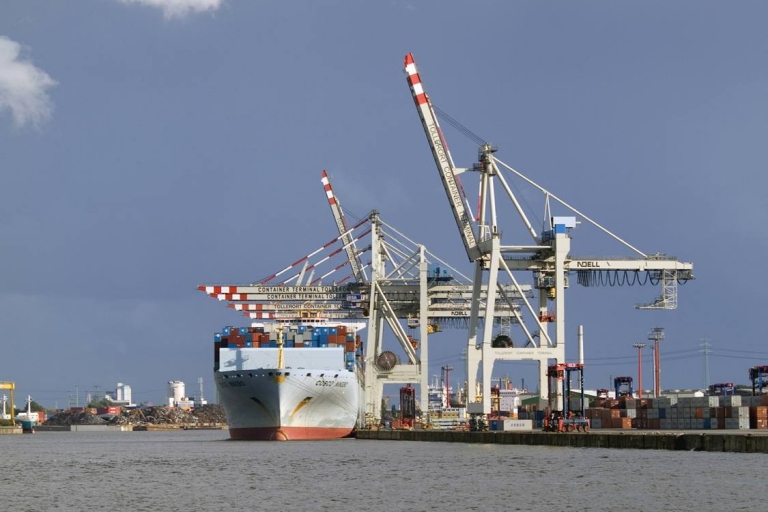 Container ship in the port of Hamburg
Regularly maintenance costs time and money. If the condition of the gearbox is monitored wirelessly, the effort of maintenance is reduced. 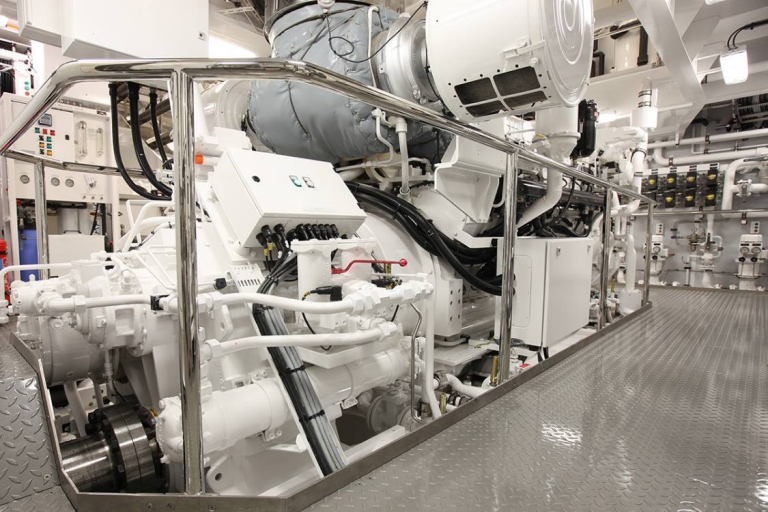 Core of the marine propulsion system: the gearbox
A similar model will be shown at HANNOVER MESSE 2015 to illustrate the new measuring system. 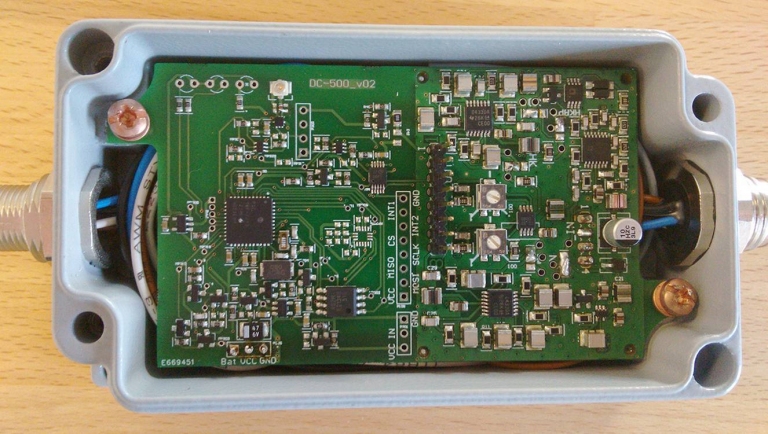 The measuring system
A sturdy metal case protects the electrical components from dirt and sea water. The microcontroller inside calculates characteristic indicators for condition monitoring.