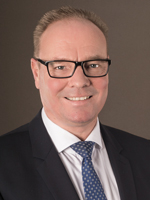 In order to enable small and medium-sized enterprises to use cross-wedge rolling in the future, existing barriers have been eliminated. For this purpose, a method was developed to enable the design of cross wedge tools using software support. For two demonstrator components, hip implant and common rail, cross-wedge rolling processes were designed. With the cross-wedge rolled preforms, flash-reduced forging sequences could be designed for both demonstrator components. In order to be able to roll the parts industrially at low cost, a cross wedge rolliing machine was designed, manufactured and built at the forging company. The complete process chain of the hip implant was successfully tested.

In multistage hot forging processes, the preform shape is the parameter mainly influencing the final forging result. Nevertheless, the design of multistage hot forging processes is still a trial and error process and therefore time-consuming. The quality of developed forging sequences strongly depends on the engineer's experience. To overcome these obstacles, this paper presents an algorithm for solving the multi-objective optimization problem when designing preforms. Cross wedge rolled (CWR) preforms were chosen as subject of investigation. An evolutionary algorithm is introduced to optimize the preform shape taking into account the mass distribution of the final part, the preform volume and the shape complexity. The developed algorithm is tested using a connecting rod as a demonstration part. Based on finite element analysis, the implemented fitness function is evaluated, and thus the progressive optimization can be traced.

Flash-reduced forging is a promising alternative for forging complicated high-duty parts. With a new process chain, the ability to reduce the existing flash quota of complex high-duty parts can make the difference in the competition and reduce the costs compared to flashless forging. The European Union is funding a research project which deals with the improvement of the forging sequence of a two-cylinder crankshaft by using flash-reduced forging. To increase the forecast quality of simulations using Finite-Element-Analysis for a future process chain design, the conventional existing process chain is simulated with FORGE3 and compared with industrial forging trials. Furthermore, a variation of simulation parameters has been used to get the significant influence parameters, fitting the results of these forging trials.

A numerical model using FEA is developed to investigate the generation of thin flash in aluminum forging. Significance and effects of the influencing parameters temperature, forming velocity and width of flash gap on the thin flash generation are shown by statistical analysis carried out with the established model. Experimental trials have been made to verify the model.

Flash-reduced forging is a promising alternative for the forging of complex heavy-duty parts. The use of flashless preforming operations is one possible approach in achieving this. Avoiding flash in preforming by keeping dies completely closed during the forging operation is the main challenge in flashless forging, especially when the parting line of the die is located at the center of the part. In order to do this, an advanced closing mechanism that completely locks the dies mechanically without the use of any spring mechanism was developed.

The most common bulk forming process is closed die forging with flash. One goal of the industry is to reduce flash. For geometrically difficult parts like crankshafts flash reduction can be achieved by flashless preforming and flash-reduced final forging. The corresponding process design is challenging and defects like an insufficient cavity filling often occur in final forging. A controlled, moveable flash gap enables the alteration of the material flow, increasing the filling of the cavity again. In this paper, the flashless preforming for crankshafts and the influence of a controlled flash gap on cavity filling are described.

In common forging processes for geometrically complicated parts such as crankshafts, an excess on material (flash) is technically needed to produce a good part, which results often in a material utilization between 60 % and 80 %. But the material costs in forging represent up to 50 % of the total production costs. By decreasing the flash ratio, the material usage and production costs in forging operations can be reduced significantly. For a crankshaft, the development of a new forging sequence was necessary, to achieve the reduction of flash. This development was performed for an industrial two-cylinder crankshaft, based on finite element analysis (FEA) simulations. The new forging sequence consists of three flashless preforming operations, an induction reheating followed by a multidirectional forging and the final forging. By use of this forging sequence the flash ratio was reduced from about 54 % to less than 10 %. Due to the huge reduction of the flash ratio, material as well as energy can be saved from now on, thus increasing the competitiveness of the company.

Pistons for combustion engines are usually made of aluminum. But increasing requirements on efficiency and performance can be met by use of steel pistons that will probably spread in the automotive industry in the next years. The pistons are forged and an expensive machining process is necessary to finish them. In the usually unidirectional forging process it is not possible to pre-forge some areas, such as the pin bores as they represent an undercut. By the help of a multidirectional forging operation it is possible to forge undercuts. This process is distinguished by a pre-forging of the pin bores and an improved material usage. Furthermore, the following machining operation will be simpler due to an easier positioning of the part. Currently, the forging tools are under development. Once they are finished they will be tested in an industrial environment on an eccentric press. The tools and parts will be analyzed concerning the quality of the parts, the die wear and the economic efficiency of this new process.

In this paper the comparison of simulations of cross wedge rolling processes with real trials using flat cross wedge tools is presented. The investigated materials are titanium and bainitic grade steel. First simulations were used to find the suitable parameter combinations for the investigated materials. Afterwards tools were manufactured with these parameters and additionally with some variations to investigate a field of parameters around this range of parameter values. The purpose of these tests is to find geometrical and process parameters with which a stable cross wedge rolling process for bainitic grade steel and titanium is possible.

Reducing die wear is an effective way to decrease costs within bulk forming processes. Therefore, specific tool materials and heat treatments as well as special coatings are used to prolong the lifetime of the tools. Diamond-like carbon (DLC) coatings show high hardness and superior frictional behavior. However, these coatings seem to be inappropriate for hot forming due to degradation processes at elevated temperatures. But for warm forming, due to the lower temperature input into the cavity DLC might be an appropriate coating. Friction influences the shear stresses on the cavity surface and is therefore an important factor for reducing die wear. Hence, the frictional behavior of DLC coatings within warm forming will be analyzed within this paper by using the ring compression test. An amorphous hydrogenated carbon coating and six metallic doped amorphous hydrogenated carbon coatings (Cr, V and W each in two variants) are compared to CrN and no coating. Firstly, nomograms are graphed by the use of Finite-Element-Analysis. Thereafter two test series are carried out varying forming temperature and lubrication. The results show that DLC coatings with and without metallic doping are able to reduce friction in warm forming. Within the investigations an amorphous hydrogenated carbon doped with 15 % chromium shows the lowest friction factor and is able to reduce the friction factor compared to no coating by up to 64 % within warm forming.

Hot forging dies are subjected to high mechanical, thermal and chemical loads. These loads can lead to die failure and therefore are one of the main cost factors in forging industry. The billet temperature is the process parameter mainly influencing the loads in forging processes. In warm forging the billet temperature is much lower than in hot forging. Warm forging becomes more and more important due to the advantages against hot and cold forging. This paper describes an analysis of FE-simulations of the change in loads on forging dies and the effect on the die life time by changing from hot to warm forging processes. Furthermore a method is presented which enables a calculation of thermal stresses in forging processes.

Using hybrid forging techniques, both bulk or sheet metal can be formed and joined in a single step, rendering subsequent joining processes unnecessary. Moreover, using sheet metal rather than bulk material means that material-savings can be made and/or more economical forming units can be used.

Preforming is an essential step in flashless forging processes. This paper describes the development of a four stage process chain for flashless forging of a crankshaft with pin and flange. The process consists of cross wedge rolling, lateral extrusion, bi-directional forging and final forming. The finite-element-analysis (FEA) performed with the software Forge 3 and experimental tests are executed with different process parameters, like billet and tool temperature, rolling velocity and steel. To reduce process steps, like lateral extrusion, a direct combination of cross wedge rolling and bidirectional forging is analysed with FEA-software Forge 3 for a one cylinder crankshaft without pin and flange. The results of the FEA give suitable forming angles alpha for cross wedge rolling and several geometric parameters for a modification of the bi-directional tool.

The production of titanium parts in small batches using a flexible machine and a fast layout method as well as a temperature and defect measurement were not considered in investigations yet. However the industry using valuable materials showed interest in this technology and the CWR module in order to realize the advantages of the CWR technology for small and medium batch sizes. Therefore a CWR machine for flat wedge tools will be developed in the EU project CoVaForm. The wedge tools used in this project will be designed for rolling titanium and micro-alloyed steel. To help SMEs a software tool will be developed for designing CWR processes. Especially for rolling valuable materials like titanium, the boundary conditions are mostly unknown; therefore pre-tests will be done to get process parameters which will enable a working CWR process. To ensure a defect-free production, a quality control will be developed based on thermography which detects defective parts directly during the rolling operation.

The production of titanium parts in small batches using a flexible machine and a fast layout method as well as a temperature and defect measurement were not considered in investigations yet. However the industry using valuable materials showed interest in this technology and the CWR module in order to realize the advantages of the CWR technology for small and medium batch sizes. Therefore a CWR machine for flat wedge tools will be developed in the EU project CoVaForm. The wedge tools used in this project will be designed for rolling titanium and micro-alloyed steel. To help SMEs a software tool will be developed for designing CWR processes. Especially for rolling valuable materials like titanium, the boundary conditions are mostly unknown; therefore pre-tests will be done to get process parameters which will enable a working CWR process. To ensure a fault-free production, a quality control will be developed based on thermography which detects faulty parts directly during the rolling operation.