Components for marine gearboxes will in future come from the 3D printer instead of the foundry. Lower Saxony's research institutes and companies are jointly developing a 3D printer that can produce steel components weighing several tons. Compared to casting, 3D printing saves resources: The researchers assume that significantly less material is required.

The marine gear cases of large ships are unique. For casting the housing parts, specially made moulds are therefore required. If the components are manufactured additively, i.e. printed instead of cast, there is no need to produce individual moulds. The weight of the individual parts can also be reduced, as different designs are possible with printing than with casting. For example, cavities or honeycomb structures can be incorporated. A steel gear housing from the 3D printer should therefore weigh a maximum of 10 tons - if it is cast, it reaches a weight of 13 tons.

A huge printing room is required to produce the gearbox housing parts, which weigh tons. Six meters long, three meters wide and one and a half meters high is the interior of the 3D printer, which research institutes and companies from Lower Saxony are developing together. This makes the printer almost as large as a freight container.

When printing the steel housing parts, the researchers at the Laser Zentrum Hannover e.V. (LZH) rely on laser-assisted arc welding. In this additive manufacturing process, steel wire is melted and welded together layer by layer. The research goal is to apply up to five kilograms of steel per hour in this way.

To ensure the quality of the components, engineers at the Institut für Integrierte Produktion Hannover (IPH) gemeinnützige GmbH are developing an inline measuring technique. This makes it possible to detect and correct errors during printing. To this end, the printing process is permanently monitored; if necessary, printing parameters are automatically adjusted during the process. If, for example, too much material was applied in one step, less material can be applied in the next step or vice versa. Since some of the material is still hot when printing and some has already cooled down, shrinkage of the material during cooling can cause distortion. "This is a hurdle that we need to overcome", says Ake Kriwall, who is responsible for the development of the measurement technology at the IPH together with project engineer Dominik Melcher.

In addition to the IPH, four other companies and institutes are involved in the research project. The project is being managed by the REINTJES GmbH, a manufacturer of marine transmissions, which intends to use 3D printing in the manufacture of large products in future. The EILHAUER Maschinenbau GmbH is taking over the plant construction of the XXL 3D printer, the Laser Zentrum Hannover e.V. (LZH) works on laser-assisted arc welding and the TEWISS - Technik und Wissen GmbH is responsible for the construction and control of the print head.
The project "Energie- und ressourceneffiziente Herstellung großskaliger Produkte durch additive Fertigung am Beispiel von Schiffsgetriebegehäuse (XXL3DDruck)" is funded by the Federal Ministry of Economics and Energy (BMWi). The project runs until the end of 2021. 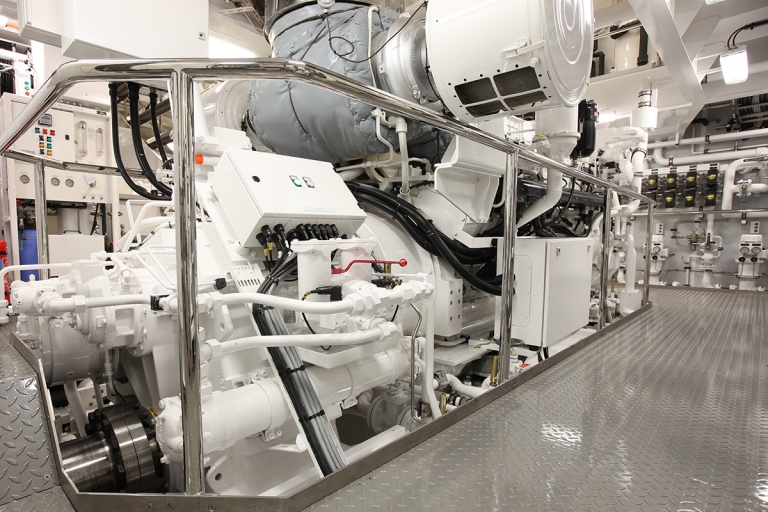 Marine gear units
The steel housing parts weighing several tons have so far been cast. In the future, they will be produced with a huge 3D printer. (Source: REINTJES GmbH)