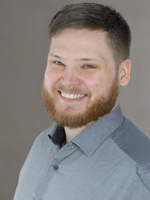 The Collaborative Research Centre 1153 (CRC 1153) “Process chain for the production of hybrid high-performance components through tailored forming” aims to develop new process chains for the production of hybrid bulk components using joined semi-finished workpieces. The subproject B1 investigates the formability of hybrid parts using cross-wedge rolling. This study investigates the reduction of the coating thickness of coaxially arranged semi-finished hybrid parts through cross-wedge rolling. The investigated parts are made of two steels (1.0460 and 1.4718) via laser cladding with hot-wire. The rolling process is designed by finite element (FE)-simulations and later experimentally investigated. Research priorities include investigations of the difference in the coating thickness of the laser cladded 1.4718 before and after cross-wedge rolling depending on the wedge angle, cross-section reduction, and the forming speed. Also, the simulations and the experimental trials are compared to verify the possibility of predicting the thickness via finite element analysis (FEA). The main finding was the ability to describe the forming behavior of coaxially arranged hybrid parts at a cross-section reduction of 20% using FEA. For a cross-section reduction of 70% the results showed a larger deviation between simulation and experimental trials. The deviations were between 0.8% and 26.2%.

Within the Collaborative Research Centre (CRC) 1153 “Tailored Forming “the manufacturing of hybrid bulk components is investigated. Therefore, a process chain consisting of joining, forming, milling and quality control has been established by multiple subprojects.Within subproject B1 of the CRC forming of hybrid parts by the incrementally forming cross-wedge rolling (CWR) process is investigated. The superior aim is to determine process limits and capabilities, when forming parts consisting of different materials joined by varying technologies.

Multi-stage process chains are often used for the efficient production of complex geometries. These consist of a homogeneous heating, one or more preform stages and the final forging step. Via inhomogeneously heated blanks, the process chains are to be simplified or shortened. This is to be achieved by setting several, clearly defined temperature fields in which different yield stresses are present. These can influence the material flow, leading to an easier production of complex parts.